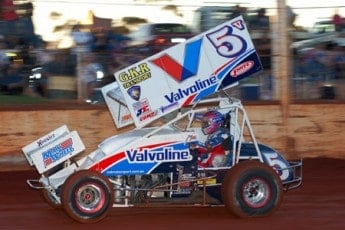 There I sit. Perched like a hawk on sun-stressed bleachers, analyzing the quarter mile dirt oval course wondering how in the world did I get here. (And I’m not referring to the interstate.) Friends in from out of town, that was it, two generations of die hard drivers. Ten minutes before race time, I watch as a convoy of City of Caney watering trucks circle, soaking the otherwise arid dirt track. How courteous and environmentally conscious. I think. Keeping the dust build up at bay. Suddenly, I feel a kinship with the speed obsessed racing circuit. My mood turns slightly more optimistic. This is going to be fun.

Nearly dusk, the tow tractors drag the short, however aerodynamic cars that remind me of colored lawn darts angling into the ground. As the starter-less motors inch up to the line, the drivers pop their clutches and instantly the crank shafts churn. Engines reeve, dust flies and the poignant scent of gasoline soaks the dry, hot air.

Fidgeting anxiously in the stands, three wood-planked rows from the top, I focus forward and measure the top of my head slightly below the protective fence. (Although this is my first sprint race, it definitely isn’t my first rodeo, having attended more than my share of hockey games, I know to sit behind the glass.)  A second later, the checkered flag waves, and the pack of neon darts tear around the track.

The first few laps are exciting, thrilling actually as the cars bump and rub, trying to edge their way to the post position. But after the fifth lap something happens. A situation I never dreamed I find myself in. One that really requires a sheet of thick, three-ply plastic. But as I said before, it’s my first race and I’m caught with my pants bunched around my ankles. Half moons exposed, completely ill-equipped.

As the car’s tires grip around the corner, golf ball sized hunks of mud fly from their treads. Lob in the air, chunk through the chain linked fence, and spray into the spectator stands. Before I even know what’s happening, I’m being pelted. Splatted. Caked with gobs of gooey dirt. Non-stop. Each time a car speeds past. During a brief break in the all out air assault, I glance at the scoreboard. Fifteen laps left to go.

At this point you’re probably thinking, what a bust. Blunder. An undesirable way to spend a highly anticipated date night. Trust me, I know. Now covered in mud monster camouflage comparable to Schwarzenegger’s Captain “Dutch” in Predator, I have to admit I feel somewhat disillusioned.  But just as I think I’m wasting valuable time, something extraordinary happens. Almost as if it’s somehow scripted. Showing me the real reason I’m meant to be in Caney Kansas.

As predicted, our friend’s son won. Not just the heat, but the overall final too. Although his top honor is relevant, what comes next is quite spectacular. After the victory lap, the winning driver steers his car to centerfield to be weighed. Glides on to a massive scale to make sure his vehicle falls within the official limits.  Keeping everyone honest. In the spirit of  fair competition.

How interesting. The hamster wheel in my head spins faster. They only weigh the cars after winning first place. Not before appearing in the arena. Or even to join the roster. Meaning that each driver is allowed into the races solely on the credibility of their word. A honor system that assumes each driver has respected the rules and only after they win do they have to prove their word true. (After all, taking someone’s word for is noble, but holding them accountable for what they’ve committed to, is just good practice–for everyone.)

How cool. In a world where honesty and credibility are often times the exception rather than the rule, the obscure niche of sprint car racing strikes a perfect balance. Take people at their word and when the moment of reckoning arrives, verify what they say is true.