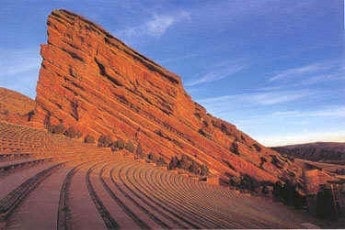 Train. Not the Eurostar, Amtrak or even Chicago’s “EL.” The perpetually evolving pop/rock band know for it’s R&B flair intertwined with heavy percussion.

The amber sun set over the sand stone peaks providing a magical backdrop as the musical locomotive chugged onto the stage at Red Rocks Amphitheater Colorado. Suck, press, bang, blow. The band cranked, vocals rang and instantly generated energy with the intensity of a combustible engine. (A hybrid of course, being in Colorado and all.) Electricity sparked, fans buzzed as the musicians recited lines of their seemingly light-hearted lyrics. But if you closed your eyes and listened, peeled away the guitars,  drums and the ten thousand cheering fans, you heard something else. Philosophical verses, multi-layered lines of cleverly constructed observations of every day experiences. The reason, I suspect, after eighteen years Train still has so many loyal fans. Myself included. One song in particular endears me to this band. My thoughts rewound to a time I rarely think about anymore. A place when I really wasn’t quite sure how I fit in.

Tarmac. Jet Aviation. Teterboro, New Jersey. In the 1990’s, my home away from home. I remember leaning against the wing of my company’s Falcon Jet, the sky covered in a grey-blue overcast. A strong wind ripped from the west and despite my wool pants suit and sturdy canvas overcoat, I still felt cold.

As I waited for our passengers to fight the New York City traffic, I glanced around at the parking ramp packed with nearly a hundred corporate jets. No exaggeration, believe me, I had more than enough time to count. An army of ramp workers weaved carefully between the wingtips, jockeying planes around on heavy towing tugs. Twice as many pilots as airplanes roamed around the remaining space. I watched as they methodically performed pre-flight prep. From a distance, we all looked similar. Uniformed, serious, slightly burdened from being on call and working rotating shifts. But as I stood awkwardly in a heavily tailored men’s suit, shined black lace-up shoes, burgundy tie, my hair twisted up in some sort of practical knot, I felt like I was slowly drowning in a sea of testosterone and wondered if someone like me had chosen the right career.  At that moment, I was fairly certain I hadn’t. Then, just as I visualized my lips being engulfed by the navy blue tide of alpha hormones, something amazing happened. The door of the Gulfstream wedged inches from our wing tip, popped open and a song resonated so loudly I couldn’t help but  hear. “Daddy wrestles alligators, momma works on carburetors…” As the song played on, I processed the lyrics, could completely relate to the unconventional ways of “Virginia”.  Like me, a non-traditional girl who fell in love with the idea of the conventional only to find out certain pegs just don’t fit in any holes.  At that moment I realized that regardless of the uncomfortable suit, the masculine shoes, my incredibly unattractive hair, I was fine. Inside, I was still that unconventional girl. My job was what I did, not who I was.

Now, I don’t have any idea if the message I received from the song was Train’s intention. I guess it really doesn’t matter. All I know is at that moment the band was vibrating at my level. Said the very things I needed to hear. For that I’m forever changed. Grateful they had the insight and were able to convert their thoughts to words.

As the night went on, the sun’s light faded away and the soft glow of twinkling stars shone against the black sky. I studied the red rocks surrounding the theater. Noticed their uneven edges. Faceted grooves. No two even remotely alike. As they were designed to be. Perfectly unique.

Completely aware of whose in control