Single or Double. Perceptions from the Cockpit. 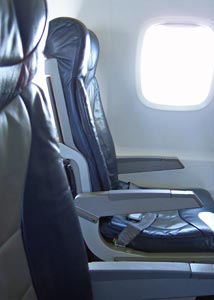 I meet the most interesting people on airplanes. Some time ago, I sat next to a pilot. Even though he wasn’t in uniform, I knew. A seventh sense of sorts. My aviator radar pinged.

“What kind of pilot are you?” I asked after getting situated in my seat.

His blond eyebrows wrinkled. “The Viper.”

I nodded my head. “So you flew the latest version, the “V” model?”

He grinned. “You sure know a lot about airplanes,” he shifted and straightened taller. “What plane do you fly?”

His smile stretched. “So we’re stick kin then?”

“The Falcon 2000 requires two pilots.” I said knowing how much single pilot fighter jet flyers hate the “c” word. As I expected, he winced.

“Couldn’t do it,” he shook his head and smoothed his jeans. “Fly in a crew. No way I would want anyone to touch stuff in my cockpit.”

The fighter pilot’s face flushed and his eyes narrowed into tiny slits. He appeared to be readying to wring my neck. His intense gaze lifted to the flight attendant call button. A better to change seats before the plane pushed back from the gate look veiled his face.

“Teasing,” I said and shoulder bumped him.

The ruddy color in his cheeks faded; a tad.

“I get what you mean,” I said. “If you do everything yourself, touch every button, dial, circuit breaker, switch, then you have a clear mental picture of the controls in your head. Not to mention, faith that is was put exactly where you wanted it.”

The last bit of red color drained from his cheeks, his complexion returned to a light, sun-kissed tan. “You get it then…” his last word dangled as if asking a question.

I locked on his thirty-something eyes, green with brown flecks, squinting in the way a scientist does when conducting an experiment.

“Sure. I think most pilots feel the same way.” I added.

“If a mistake is made its on us, so if you do it all yourself, the flight goes as intended.”

“Exactly,” his sturdy shoulders softened. “But, then,” the jet jock’s face bunched. “how do you fly planes type-rated for two pilots?”

“You’ve only flown in the military, right?”

“Flew fighters for three years and now I work for NORAD,” his voice was strong, assured, confident. “I’m on my way to Tulsa, to fly with the 138th guard unit. I need to get current in the F-16.” He squeezed his fingers into fists. “You?”

“Most of my experience is flying corporate jets.” I twisted in my seat.

He postured. The muscles in his chest flexed.

“Here’s the thing,” I faced the accomplished aviator. “Imagine you’re in a cockpit.”

“No big stretch there,” he chuckled.

“A large cockpit,” I said long and slow with a hint of sarcasm.“One with an aisle and enough room to sprawl across.”

He rolled his eyes.

I winked. “Now envision yourself in your pilot groove. Maneuvering the airplane as if it is an extension of your arms, legs, hands. If you as much as think turn left, the airplane banks, if cued to begin a descent, your grip seems to adjust the power levers automatically.”

A focused glaze covers my fellow aviator’s eyes and I know he understood.

“What if, that same sort of flow could include another person? What if before you reached to set a new altitude in the alerter or change course, someone’s hand was there awaiting your command. When the weather turns sour in a hurry, your second in command had already zoomed the radar, sent a request for the latest forecasts and radioed the air traffic controller for reports from other pilots. How about when there’s a malfunction? An unexpected in air event or a sick passenger in back? And when you called for the checklist, your crew member had your back, the to-do list in hand?

His eyebrows shot up, near the top of his buzzed head.

“What if a crew, isn’t actually two individuals, but a unit, experienced and trained to such a high level that it feels, like the airplane, that the first officer is a spare, functioning appendage?”

Yes. I conveyed with a nod.

He collapsed back in his seat. “Guess I never thought of it like that.”

We sat quietly as the airplane left the gate and taxied into position on the active runway. Up front the pilot’s added throttle, the plane lumbered for a few thousand feet, broke ground, and lofted into the air.

My seat mate knocked my elbow from the shared armrest. I looked up, he glanced over and our gazes met. “So that’s what crew coordination is like?”

“Can be,” I answered. “A crew, a team, mentors, friendships, partners, even a marriage.”

He held my eyes for a minute, blinked away and looked out the window. “Who wouldn’t want a relationship like that?”

When people are equally invested in any mission, how could it fail?