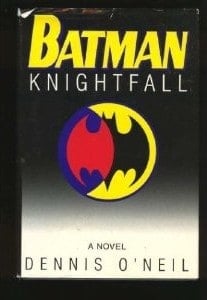 Favorite parts: Bane. The grim and tormented backstory on one of the most maniacal villains ever born. Never mind to fight, the seemingly invincible Batman. Now that the final chapter in Christopher Nolan’s “Dark Knight” trilogy is within spitting distance, I figured the timing right to review this multi-layered novel that reads like a suspense thriller.

Favorite line: “The sins of the father are bestowed on his sons.”

Summary: Gotham is still riddled with crime. Out on nightly patrol, Batman attacks a mob hideout only to discover a new breed of super criminal has joined the ranks. The massive, muscular, bull-of-a-man makes an alliance with the local thugs only to get a glimpse of the symbol that terrorizes his dreams. Bats. With an opportunity to confront his only  fear Bane cleverly breaks every inmate out of Arkham Asylum in hopes of studying his nemesis. As expected, Batman focuses on trying to round up some of Gotham’s most dangerous psychopaths. Exhausted and fatigued by the shear number of arrests, the Dark Night, becomes vulnerable. With his prey at his weakest, Bane takes the advantage and attacks, forcing Batman into the fight of his life.

To Alan Johnson, my fellow “bat enthusiast” who introduced me to the literary side of the cowled crusader-thanks for getting me hooked.