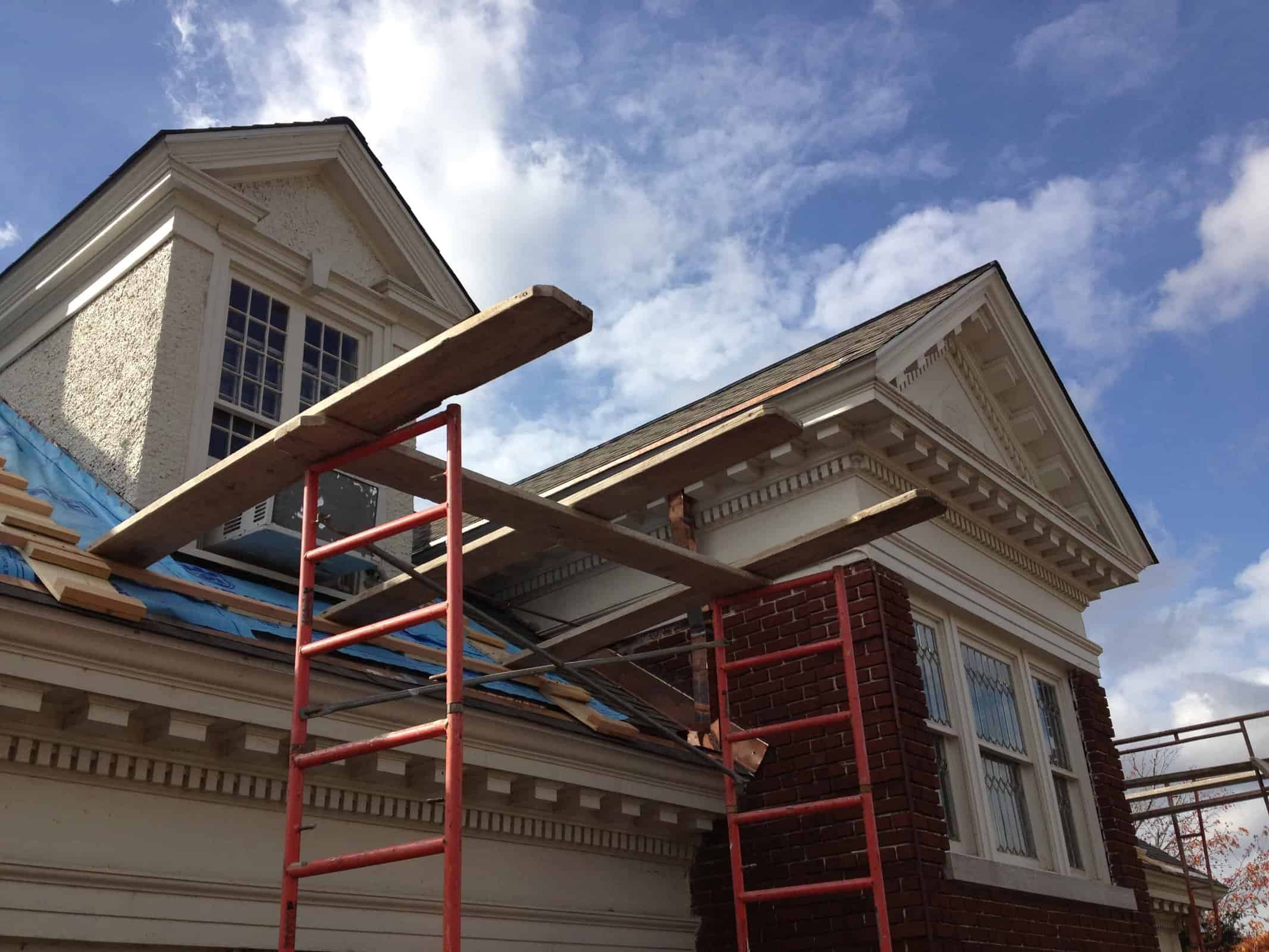 Two hours later, I could barely catch my breath. Fingers trembled. My insides twitched. Lightheaded as if drifting in and out of an early morning dream, my mind scrambled to sort out if I had just willingly come face to face with my greatest fear and spit in the wind?

Curious the things I can do when put on the spot. Spontaneity allowed no time to reflect, worry or concoct an intricate story of why I shouldn’t accept an invite to climb three stories of open-air scaffolding. Without a harness. D ring, or some sort of safety net. I’m terrified of heights, after all. A fear, I’ve heard, common among pilots.

So there I stood, on my heels, opposite the lead framer who was replacing the trim on our house’s third story window sills. “Don’t you want to climb up and see what the finished product looks like first hand?” he asked.

No. Absolutely not. I shook my head. But for some reason I blurted, “Yes.”

The framer hiked an eyebrow. Squinted like he was receiving mixed messages. “You sure?” His gaze drifted up the pegged stairway that appeared to go to heaven.

Might as well, as far as I was concerned, since anything over one story sent my internal risk manager into a full-blown panic. “Take your own advice,” my subconscious whispered. “Stop avoiding things that scare you. Step up–today is the day.”

My own advice, terrific. I thought. Wondering if those inspirational words were mine or something I read from a fortune in a Chinese restaurant. “I’m kind of sure,” I said to the framer. Making certain that my head bobbed in the affirmative. I pulled a pair of gardening gloves from my waistband and slipped them over sopping palms. I bent and tied my sneakers extra tight. Stood, flat-footed, and faced the scaffold’s narrow ladder.

I closed my eyes and filled my lungs with what I imagined was the fiery energy from the core of the earth. While nature’s courage flowed, my thoughts traveled up to the sky past the sun and into the brilliant swirl of the Milky Way. Hovered for a second and when my chest expanded to it’s limits, I exhaled; Funneling the doubt and fear from my lips. When my lids cracked, I felt calm, centered and balanced.

“I’ll go first,” the framer called over a shoulder and glided up the metal pegs. In no time, he was at the top. He swung a leg over the double rail and glanced down at me unaffected. “You’re turn,” he waved.

I shuffled forward and gripped the thin side rails. I’m about to step on the first bar when I hear the framer’s voice. “Remember…” My eyes shot up to meet his, heart beating like a snare drum. I felt my lip quiver. He smiled sweetly, then said, “Don’t look down.”

There’s still time. I leaned back and craned my neck to see the comfort of the garage apartment. But when my stomach wrenched, I knew I no longer wanted to be controlled by some irrational, emotional disconnect. I took one last look at my coach, and seeing certainty in his eyes, I exhaled, stepped on the bottom rail and began the ascent.

“Shimmy one hand up then the other,” the framer coached. “That’s right, now move your left foot to the next peg, then the right.”

Listening to the framer’s voice, I climbed seamlessly up the first third of the ladder. Even found myself thinking, well, heck, this isn’t all that bad. But a second after the thought passed, a colossal wad balled in my throat. My hands froze. Feet stuck as if I stepped on a glue mouse pad.

“Oh no,” I cried out, blue sky smearing across my view. The ever dependable line of the horizon, tilted and began to twist. My neck ratcheted back. Dizzy, I hugged the steel ladder to my chest.

“You stuck?” the framer’s words quickened. “I can come down, crawl around and help.” Although my eyes were shut, I imagined him with one leg already over the safety rail beginning a rescue attempt.

Why did you do this? The risk manager reared his conservative head. No, wait. My subconscious rallied back. You chose this challenge in order to move forward. Get going. You can do this.

Out of nowhere, I heard a pop. Felt the plug in my throat release. Air flowed freely and I made eye contact with the framer. “I’m okay, keep talking…get ready here I come.” Every inch of my body shook like a rain stick. I focused and followed the framer’s directions.

Right hand, left hand, right foot and left. My gaze locked on where to grab next. What seemed like a week passed, although if timed, it was probably only a few minutes. The next thing I knew, I was staring in framer’s steel iris’. Stiff legged, holding on with every ounce of my strength, I stood on the very top step. I should have been relieved, making it all the way up, but being a spur of the moment decision, I hadn’t thought through what would happen next.

“Let go with one hand and…” the framer started, but that same voice that sounded so confident earlier went animal wild.

Before I recoiled, he locked tightly on my arm. “Don’t worry,” he said calmly. “I won’t let anything happen to you.” And before I could make him double dutch swear, spit handshake or exchange blood, he had peeled my clamped fingers from the side rail and wrapped his hand tightly around my green-stained gloves.

My leg lifted automatically, and I straddled the upper safety rail. Teetered until my tow touched the planked floor. Then I swung my remaining thigh over. The framer lifted my gloves from the rails, laced his fingers through mine and, together, we moved towards the steep pitched roof. Squatted down and sat shoulder to shoulder, our backs to the abyss I’d just scaled. We steadied our feet against the shingles and he pulled two pieces of wood trim from his pocket. Slid them against one and another and then held the mitered pieces against the newly installed paned window. “What do you think?” he proudly showcased his work.

Still trembling, I said, “I think it takes a village.”

No matter how many rejections, rewrites, and submissions there is no reason to be afraid.

As Nemo says “Keep swimming.” aka The Glamorous Wife.